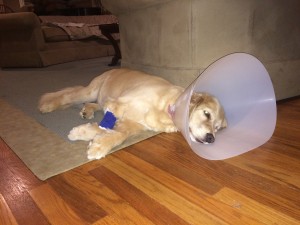 This week, our family dog Grace had surgery on her leg to remove a tumor. She came home with stitches, a bandaged leg . . . and the cone. A funnel-shaped piece of extremely durable plastic, the cone fits around Grace’s head to prevent her from chewing at her wound, from inflicting pain on herself in her vulnerable place.

Grace hates the cone. No, hate might be too gentle a word. She cries and paws at it. Sometimes, her fussing gets to be too much (especially in the middle of the night), so we take the cone off to give her a break. Most times, within a few minutes, we find her chewing away at the danger zone, and the cone returns.

This entire experience made me think how the Lord gives us limits, too. His restrictions are meant to protect us, because He cares deeply about us.

The Lord gives us limits because He loves us.

I don’t put the cone on Grace because I want her to suffer. I leave the cone on Grace to avoid greater suffering. It’s a limit based on love. The Lord does the same thing. He speaks out limitations in His Word from a heart of love, things like, “stay away from this, avoid that.” It’s like a parent warning a child not to put their hand on a red hot cooktop burner. He wants us to avoid the greatest pain that comes from doing things our own way, from going after the elements of this world that cause torment.

He tells us that His limitations are for our own good (Deuteronomy 10:13), so that it might go well with us and our families (Deuteronomy 4:40). He says “no” because He loves us. He knows where we are vulnerable, and He instructs us to stay away from those places. When we read His Word, we learn about His loving restrictions, and His Holy Spirit reminds us to obey them.

We choose whether or not we will receive the gift of His limits.

Grace is not able to remove the cone. On the other hand, we have a choice: to live as God says, or not. He never forces us. He tells us how to live and how much He cares for us. We decide if we trust Him enough to choose His ways. We decide if we see His limits as a gift.

David asked the Lord in Psalm 139:24, NASB, “See if there be any hurtful way in me, and lead me in the everlasting way.” David was telling the Lord he trusted Him, and he wanted the Lord to show him how to live in a way that would not harm him, others, or the Lord’s reputation. David was embracing the Lord’s limits.

We can cooperate in the limitation process.

This past week in Sunday School, we studied the first sin in Genesis 3. I shared something I had heard years ago: “Eve would not have sinned if she hadn’t been hanging out at the tree God had told her to stay away from.” Each of us knows our own “vulnerable places.” We would be wise to seek the Lord about the practical boundaries and limitations we should establish to avoid the pain of sin. We can cooperate in the limitation process, knowing it is best for us, knowing God wants to bless us and protect us from harm.

Jesus, Himself, accepted His own limitations from God. “Although He existed in the form of God, [He] did not regard equality with God a thing to be grasped, but emptied Himself, taking the form of a bond-servant, and being made in the likeness of men. Being found in appearance as a man, He humbled Himself by becoming obedient to the point of death, even death on a cross” (Philippians 2:6-8, NASB).

Jesus did not accept the limitation of being human to avoid sin. He did it to redeem us from sin, so that we could live as “more than conquerors” (Romans 8:37, NASB), so that we could thrive and live powerfully as we embraced the Lord’s loving limitations.

Grace’s cone will come off in a couple weeks, when her vulnerable place has healed. Thanks to Jesus’ work on the cross, our vulnerable places don’t have to hurt us any more (unless we choose the pain). For “by His wounds, we are healed” (Isaiah 53:5, NIV).

Question: How has the Lord blessed you with His loving limits? Comment at the link below.

Standing on the Rock
Lessons Learned from a Lost Dog