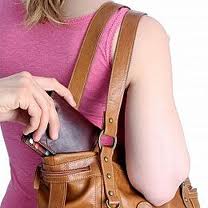 My mother whirled around and shouted, “Did you just put your hand in my purse?” The woman behind her jumped off the subway train just as the doors were closing.

“Hold your purse in front of you. Pickpockets are bad here,” said Silvana, a friend who accompanied me, my mother, and my mother-in-law on a trip to Rome last week.

The incident frightened us, but fortunately, the pickpocket did not get anything from my mom’s purse. We boarded another subway train later and watched a man chase off another young woman who tried to lift his wallet. Me, my mother Jane, and mother-in-law Sally in Rome

On a spiritual level, we all have an enemy who comes to steal (John 10:10). He wants to rob us of our joy, peace, and hope in Jesus. Our job is to chase him off.

“Be strong and courageous. Do not be afraid; do not be discouraged, for the Lord your God will be with you wherever you go.”

The Bible tells us 365 times (once for every day of the year) not to be afraid. It must be pretty important for the Lord to say it that many times. Our enemy tries to steal the abundant life we have in Jesus, and he often tries to do so through fear. He knows if we let fear operate in our lives, we will be distracted from all we have with Jesus. Fear comes at us to try to steal from us. We decide if we let it in to do its destructive work. We need to chase it away like my mother chased away the pickpocket.

One of Dr. Charles Stanley’s life principles is that disappointment is inevitable, but discouragement is a choice. The devil tries to plant the seeds of discouragement, but we decide if we will let them take root. Allowing ourselves to be discouraged robs us of precious possessions—the joy, peace, and hope Jesus gives us.

Feeling the initial pangs of fear or discouragement can serve as signals to watch out, much in the same way as the tug on my mother’s purse captured her attention. When we feel tempted to give in to fear or discouragement, that’s the time to spring into action. That’s the moment to embrace faith and take courage.

Joshua 1:9 says don’t be afraid, and don’t be discouraged. It says do be strong, and do be courageous. It refers to opposite reactions to life’s circumstances: fear and faith, discouragement and courage. We can’t always control what happens to us in life, but we can control how we react to it. Our reactions determine whether we keep our treasures or allow them to be stolen from us.

“Be strong” in Joshua 1:9 literally means to “seize” or hold on to. It speaks of faith and believing God. In fact, “believe” in the New Testament (the verb form of faith) means to “cling to.” When fear snatches at us, we are called to chase it off and to embrace faith instead. We must hold on to God. We are told we have joy and peace in believing Him (Romans 15:13). We can remind ourselves of who He is, what He says, and how He keeps His promises. Our faith grows stronger as we exercise it.

Jesus says in John 16:33, NIV, “In the world you have tribulation, but take courage; I have overcome the world.” Psalm 27:14, NASB, says “let your hear take courage.” We receive courage from the Lord. We should not let the enemy take it from us. We maintain a courageous spirit by praising and thanking the Lord and reciting who we are in Him.

The Holy Spirit helps us fight off the enemy by reminding us to chase away fear and refuse discouragement and instead embrace faith and take courage. When we do that, we get to:

“For the Lord your God will be with you wherever you go,” says Joshua 1:9. Along with His presence come power and provision for every need. Since He is with us, we do not need to be afraid or discouraged. We can celebrate Him instead.

The Lord allows the enemy to come at us so we can learn to stand in faith and courage, so we can have experience in recognizing and chasing away the thief. So we can grow.

Let’s turn the tables on the thief and steal from him instead. Let’s steal the victory from him and give to the Lord!

Question:  What practices have helped you in chasing off the thief? Comment at the link below.

View all posts by sjking →
Walking Along The Walls
Practicing Hospitality