By sjking on April 2, 2015 in Abundant Life, Autism, Family, Relationships 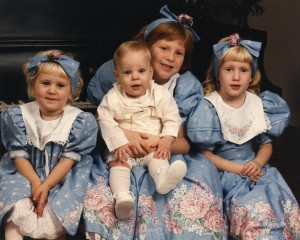 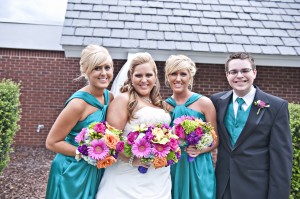 Patrick and his sisters

How did my daughters learn to be more aware and accepting of the challenges their brother faced with his autism? Since today, April 2, is World Autism Awareness and Acceptance Day, I would like to post the chapter from my book, “Optimism for Autism,” which shows how that happened. May all of us seek to be more aware and accepting of those whose lives are touched by autism and other challenges.

“Be sympathetic, love one another, be compassionate and humble.”

My heart went out to my daughters.  They were young and needed attention, too.  They didn’t understand about Patrick’s autism.  My saying, “His brain works differently than yours,” wasn’t cutting it with them.  Praise God for the TEACCH Center!

“Bring in the girls, and we will explain to them about Patrick’s autism,” Sue said. (Sue McCarter was one of the specialists who helped Patrick at TEACCH.)

So, one crisp autumn afternoon, I loaded up the three girls and Patrick into our family van and headed to the TEACCH Center.  Oh Lord, please help them understand their brother.  Help them appreciate him for who he is, I prayed.

I didn’t want them growing up to resent Patrick or the time I had to spend with him to help him.  I knew God gave us Patrick for special reasons, many of which were still unfolding.  I wanted them to learn to trust God in the midst of everything, which I was still learning to do.

“Why don’t you stay out here in the lobby with Patrick while we take the girls back and talk with them?” Sue said.

“Okay,” I said.  “Have fun girls!” I hoped the positive tone of my voice would wash over them and take hold.

In an hour or so, Katie came bounding back into the room, her auburn hair flowing behind her like the jet stream of an airplane. I could tell her flight pattern was in direct line with her brother, who was standing on the other side of the room, his eyes trained on the multiple colors and patterns found in a painting on the lobby wall. My autism alert system immediately went into effect.

I struggled to intercept Katie before she initiated a major meltdown. Emily and Sarah were trailing along behind Katie. Their pace was much slower and contemplative, their eyes full of wonder.  I instinctively knew I would not reach Katie before she bombarded her brother with a barrage of unexpected sensory input. I braced myself for the chain reaction. Suddenly, Katie jerked herself to a halt. Her brother, aware of his sister’s presence, steadily turned his gaze toward her.

I caught my breath.

She had never asked for permission before.

Patrick slowly nodded, and Katie gently put her arms around him and squeezed. Emily and Sarah had reached them by now, and they, too, asked for permission to embrace their brother. Patrick agreed, and I watched a miracle unfold before my eyes as my four children held on to each other and freely gave and received one another’s love. Patrick had prepared his nervous system for that encounter because he knew it was coming.

A new light had dawned for my daughters. They knew Patrick lived sequestered away in a fortified city with the name of Autism, but now, someone had shown them how to gain access to Patrick’s world. And they had enthusiastically entered the gates and had found their brother inside.

Thank You, Lord, for allowing my children to find one another. Help them to continue to grow strong and close. Lead them to cherish and defend each other because You have made each one of them unique and special, I prayed.

I gathered up my brood and headed out the door. On the way home, my daughters chattered about their experiences at the TEACCH Center.

“First, they took us into this big room,” Katie said. “Then a lady walked in and started talking to us. Only we did not understand what she was saying. She kept making sounds, and we could tell that she wanted us to do something. But we did not know what she wanted.”

“Miss Sue told us afterward that she was speaking German!” Katie said.

“She told us Patrick hears words like that,” Emily said.  “He hears the sounds but doesn’t always know what they mean.”

I watched Emily’s face soften as she spoke about her brother’s struggles.

“Tell Mom about the gloves!” Sarah piped in, proud that she was part of the discovery team.

“Well,” Emily said.  “They took us into another room with tables, and there were pennies all over the tables.  They had us put on these big, wooly gloves, and then they told us to pick up the pennies.”

“Have you ever tried to pick up pennies when you had gloves on?” asked Katie, not wanting to be left out of the conversation.

“I don’t think I ever have,” I said, grinning inwardly.

“Why did they make you do that?” I asked.

A swell of gratitude was building inside of me.

Thank You, Lord, for using the wonderful people at the TEACCH Center to help my daughters better understand their brother, I prayed.

“What about ice cream and spinach?” I asked.

“They helped us understand why Patrick freaks out about certain types of food,” Emily said.  “They said his tastes are all messed up.  Like, he might eat some ice cream, and it would taste like spinach.”

“Yuck!” said Sarah, wrinkling up her little button nose and turning her mouth into a grimace.

“Yeah, and guess what else?” Katie said.  “He hears sounds really loudly.  They took us into one room and played this music soooo loudly, and then they told us that Patrick hears sounds that loudly.”

“We had to cover our ears,” Sarah said, demonstrating with her own hands.

“I bet that’s why he goes crazy when we go running around the house making all kinds of noises,” Emily said.

“I feel bad for Patrick because so many things are hard for him,” Katie said.

“Things that are really easy for us are a struggle for him,” said Katie, growing unusually still and silent.

For once, I was grateful for the long drive back to China Grove.  It was giving us precious time to reflect on the treasure of discoveries uncovered at the TEACCH Center.

“Yes, many things are difficult for Patrick,” I said. “But God promises that He causes all things to work together for good for those who love Him and are called according to His purposes.  So that means He can take even Patrick’s autism and use it for good . . . for Patrick, for each of us, for others.  And I think it’s teaching all of us to trust Him and to rely on Him, which is a very good thing.”

The three girls grew silent as they pondered my words.  Patrick continued to doze in his car seat, the rhythm of the road creating a gentle nodding of his head.

What had I learned that day?

How many times had I made a snap judgment about someone based on their outward behavior?  How many times had I reacted in frustration or anger, or defined someone as “good” or “bad” without making any attempt to understand what was happening in their life?

Lord, help me to see people as You see them, I prayed as the odometer continued to click the miles toward home.

I love my sisters. They mean a lot to me. After that day at the TEACCH Center, they started to understand what I was going through. I feel like they love me and care about me. I am grateful to have such caring sisters.

God taught me that He supplies all my needs according to His riches in glory in Christ Jesus (Philippians 4:19, NASB). God knew I would need lots of support, so He gave me a wonderful family to help me along the way. My dad taught me a lot about being strong and brave, being a man who honors God, and never giving up. He tells me I am his hero. But really, he is mine. He even challenged me to hike Mount Whitney, the highest peak in the continental United States, and we did it—together. (See Chapter 12.) Along the way, I learned to face my fears and be strong, like a man.

And my mom has taught me a lot about God’s Word, and she prays with me and reminds me to go to God with all my problems and challenges. She has helped me a lot over the years taking me to therapies, working with teachers, and helping me to be organized, too. And my sisters Katie, Emily, and Sarah and brother-in-law Curt (Katie’s husband), and all my relatives, they accept me for who I am, and they love and encourage me all the time. They have been a huge blessing to me.

SOMETHING TO THINK ABOUT:

Are you dealing with someone you do not understand?

What could you do to understand them better?

Would you ask the Lord to help you see people as He sees them?