By sjking on November 5, 2014 in Uncategorized 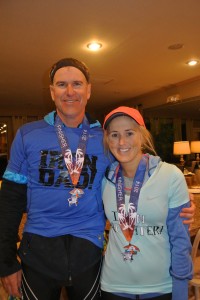 David and Sarah with their medals after finishing the full Ironman

My husband David and daughter Sarah completed a full Ironman competition in Panama City Beach, Florida, this past weekend. A full Ironman triathlon involves a 2.4-mile swim, a 112-mile bicycle ride and a marathon 26.2-mile run, raced in that order with no break. The events must be completed within 17 hours to achieve the Ironman distinction. Most athletes would agree the Ironman is one of the toughest athletic competitions out there.

Sarah experienced her first Ironman this past weekend. David participated in his fourth competition. Both of them exhibited a fierce determination to get to the finish line.

So did the apostle Paul. He knew his time on earth would end soon, and he said, “I have fought the good fight, I have finished the race, I have kept the faith” (2 Timothy 4:7, NIV). He had achieved his goal: crossing the finish line with his faith intact, having lived a life that honored the Lord.

After watching David and Sarah in the Ironman competition, I learned some spiritual lessons that can benefit all of us as we aim for the finish line in life:

Accept Disappointments and Move On

David and Sarah arrived early on Saturday morning, donned their wetsuits, and prepared to enter the Gulf of Mexico for their swim. Shortly before they were to start, the announcer broadcast that due to high winds, extreme cold, and severe rip currents, the swim portion of the triathlon was being cancelled. I watched as some of the participants fell to the ground and wept in disappointment. They had trained, travelled, and anticipated the swimming event, and things did not go as planned. 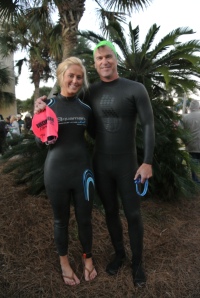 Life can be that way. We live in a fallen world, where circumstances don’t always cooperate with our expectations. It’s okay to be disappointed, but at some point, we have to decide to move on, to experience the race in the way the Lord has ordained for us. That’s what my family did.

Shortly after David and Sarah heard about the swim cancellation, David began planning how they would approach the rest of the competition. The race organizers decided to wait an hour and then begin the bike portion of the competition. They released a competitor to bike every 5 seconds, beginning with the smallest race numbers and concluding with the highest. Sarah’s number was 1174, and David’s was 2804. That meant Sarah had to start about an hour ahead of her dad. They agreed she should do so in order to save time. David would try to catch her, and they would complete the rest of the event together.

What neither of them anticipated was how late David would start and how fiercely Sarah would attack her bike race. She dug in during the race and finished the entire 112 miles by herself. She didn’t focus on the disappointment of how things turned out. She concentrated on the task at hand, and she completed it successfully. She told me she set little goals along the way during the entire competition, and reaching those milestones helped drive her toward the finish line.

I asked Sarah what helped her during the race, and she told me, “I tried to have a good attitude, to enjoy it, have fun, and really take in everything I was experiencing.” Her comments reminded me how we need to be truly “present” in the moments of life, to take them in and savor them. The Lord blesses us with so many gifts right now, right here in our present moments. We can miss out on what He has for us today by yearning for something that is meant for tomorrow or by focusing on hurts of the past.

Sarah also looked for her daddy throughout the race. She knew he was in the race with her. Our heavenly Father is with us, too. He wants our eyes to be looking for Him, our ears to be listening for Him, and our hearts to be focused on Him as we run the race of life. The attitude He desires from us is faith . . . to believe in Him and what He says, and to run accordingly.

Every few miles along the race course, the competitors could stop at aid stations (or bike or run through them) and grab food, water, nutrition, and other fuel to help them through their demanding journey. David and Sarah had spoken about and had planned when and where they would get their nutritional fuel during the race. They even carried some nutritional items on them.

From a spiritual perspective, we need fuel too. Jesus is our bread of life, and He gives us living water (John 6:35; John 4:10). His Word energizes and strengthens us (Deuteronomy 8:3, Psalm 119:28). He gives us the ability to pray and gather with other believers in order to fortify us for the race at hand. We must incorporate this fuel into our lives on a regular basis in order to remain healthy and strong as we race toward the finish line.

Sarah and David said lots of folks encouraged them as they ran. Several friends and relatives made the trip to Panama City Beach, put on “Team King” t-shirts, showed up along the race course, and cheered on David and Sarah as they competed. 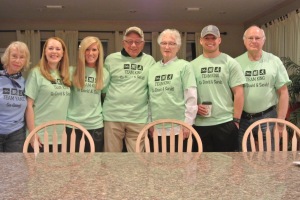 Some members of “Team King” (and “Team Yanz,” a friend also competing)

Since David started the race after Sarah and because it was Sarah’s first Ironman event, David concerned himself with how she was doing. While trying to catch up with her and whenever he would see us along the marathon course, his first question was always, “Where is Sarah? How is she doing?” He wanted her to succeed and have a positive race experience. He cared about her.

Jesus said, “It is more blessed to give than to receive,” (Acts 20:35, NIV). Often, we are more blessed trying to help someone else finish their race than totally obsessing over our own contest.

That motivation kept David running. He caught up with Sarah around the 18-mile mark of the marathon, and they finished the event together, crossing the finish line with hands joined and arms raised in triumph. David wore a t-shirt that said, “IRON DAD,” and Sarah’s t-shirt said, “IRON DAUGHTER.” We can all help one another and encourage one another in our spiritual races. We can aim for the finish line together.

When Paul realized he was about to cross the finish line of his race, he said, “Now there is in store for me the crown of righteousness, which the Lord, the righteous Judge, will award to me on that day—and not only to me, but also to all who have longed for his appearing” (2 Timothy 4:8, NIV). 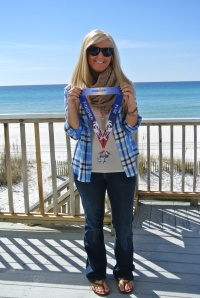 Sarah with her Ironman medal

Just as David and Sarah were awarded medals for completing their race, each of us has a great reward waiting for us when we cross over from this life to the next. When we cross the finish line, our prize, our righteousness, will be Jesus Himself, and we will spend eternity with Him after our race.

Question: What has helped you in aiming for the finish line? Comment at the link below.